I am mostly a backend developer, but every now and then I need to do some frontend work. Even if just for personal use.

For that reason, I’ve been following developments in the JavaScript world from a distance, but I dislike much of what I see. 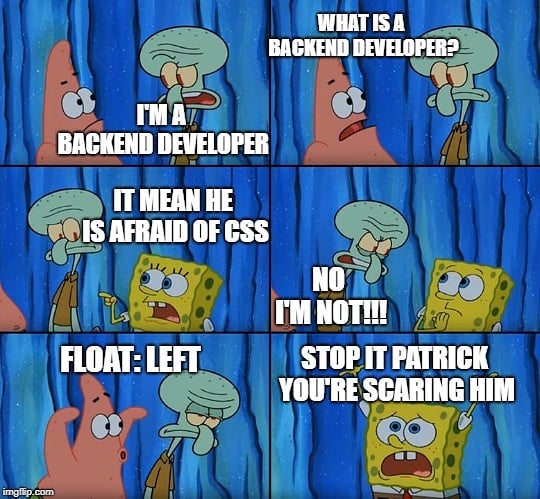 The thing I dislike most is how complex the toolchain for a professional JavaScript application has become. The days when you wrote a few lines of HTML, opened it on the browser with file:///home/me/index.htlm, then linked to a simple JS file to add dynamic behaviour - with updates only a page refresh away - seem to be long gone.

The MDN page on JavaScript actually shows how to use HTML and JS as it was intended - no build tools, no frameworks. If only people listened.

The JavaScript toolchain of today has all the complexity of backend toolchains, and then some. And just a handful of years ago, many parts of the toolchain were different! Checking some of the answers on this StackOverflow question is hilarious.

This article from 2016 that keeps coming up on Google and DuckDuckGo searches shows how a basic JS development environment consists of:

If you follow instructions from that article, you end up with 3 config files (one for each of npm, babel and webpack), your build steps are managed by shell scripts embedded into a JSON config file, and your project now requires a compilation step and a live reloading HTTP server to run.

At this point, I thought that if I am going to be compiling stuff, I should at least use a compiler that can type check my code!

So why not try TypeScript?!

I then followed this tutorial to start a TypeScript project.

Now, on top of those config files I mentioned earlier, we get 2 more: tsconfig.json and tslint.json.

It’s all so complex Google has even created a tool (GTS, or Google TypeScript Style) to manage TypeScript config. 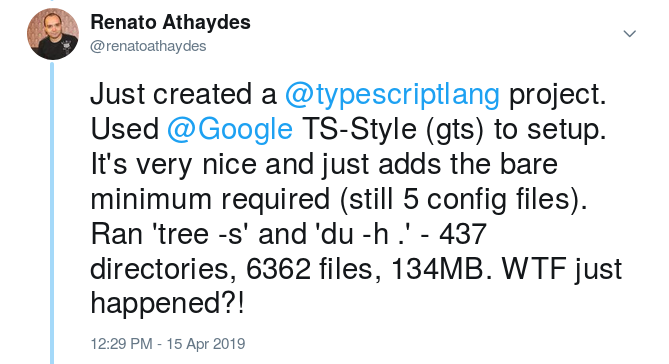 I tried to use that but then the browser refused to run my JavaScript file with some module-related error… I don’t know which of the myriad tools I was using could fix this for me, so I just decided to look for alternatives to this madness! In doing so, I found this really nice blog post proclaiming that You might not need a build toolchain.

It shows that it’s still possible to use modern tools like React without build tools!! But unfortunately, that is not very practical once you start using dependencies and your application grows larger than a few hundred lines of JavaScript.

Back to square one.

Given that a build/compilation step seems to be a necessary evil no matter what we do, and that we’ve known how to write large applications for a long time in the backend using decent tools, why not try to use those in the front end too!?

After all, back in 2011 when I was doing web development, people were already experimenting with that idea… for example, I was using GWT, which is a Java-based web toolkit, in 2011… surely, 8 years later, the scene should have improved a lot for Java-based web applications?

I set out to see what’s available out there. Can a backend developer who is happy to stay with the nice tooling and great ecosystem of the Java world do frontend work without jumping ship to the madness of the JS world?

Get ready to find out!

As a means of comparing each option listed in this blog post, I decided to create a very simple counter app, just like the React app demonstrated in the
You might not need a build toolchain blog post I mentioned earlier.

For reference, here’s the code for that app using React (without JSX):

The methodology I used to compare the different options is very straightforward:

The last bullet point was inspired by the blog post A real-world comparison of front-end frameworks.

The application size is determined by looking at the browser’s network tab (all types of resources are included to avoid favouring frameworks that rely on heavy, non-JS resources).

Here are the React’s results for reference.

The React JS files were downloaded and served from the local server instead of from a CDN to make comparisons fair.

Now, we know what we’re up against!

So, here we go, starting with the grandpa of all Java-based web toolkits: GWT.

Click on the titles below to expand each section.

Let’s jump straight to a summary of the results:

bck2brwsr is not included because I couldn’t get it working. If anyone points out what went wrong with my attempts, I will update the results.

* CheerpJ’s result was too large to be shown on scale, so it is shown here 10 times smaller than it is

Q. Performance is of the essence?
A. You should probably pick JSweet or TeaVM.

Q. Do you like a small footprint?
A. JSweet wins by a large margin, but TeaVM is also pretty good.

Q. Do you want to have the smallest code base to maintain?
A. Vaadin Flow is great for that. The other options are all very close to each other, so it probably wouldn’t make much of a difference… they all still manage to beat React!

Q. Do you want something as close as possible to normal Java?
A. Vaadin Flow if you care mostly about UI components, TeaVM if you care about business logic.

Q. Do you want something as close as possible to the JS ecosystem, but still using Java tools?
A. JSweet is perfect for you.

Q. Do you want something that is Java, but in the browser!
A. Ha! CheerpJ actually manages to do that! It has a heavy cost, but it works as advertised.

Q. Want to try something different from Java, just not JS?
A. Elm is an accessible, functional programming language designed to create web applications. It has great tooling, including an awesome IntelliJ Plugin, so it’s perfect for Java developers who always wanted to go functional! Another option a little closer to home is definitely Dart. Very similar to Java but with lots of syntactic sugar to make common tasks easy. Ant it comes with great tooling, including a hot-reload server, and frameworks like Angular and React if you need them.

If you’re curious how the JVM alternatives compare with Dart, I added the Dart implementation to the GitHub repo. The results: Application size: 79KB, Performance: 100 (FCP: 1.4s), Lines of Code: 31.

All code shown in this blog post is available on GitHub, including the React.js and Dart implementations, for comparison with the Java implementations.