Taking Project Loom for a spin 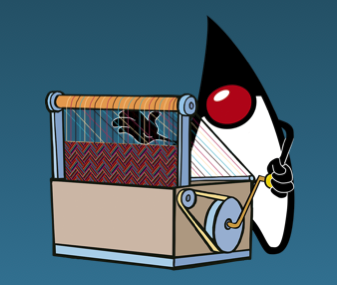 Project Loom is one of many the Java JDK’s incubating project that aim to design and, all going well, deliver new features to Java.

Its objective is to support easy-to-use, high-throughput lightweight concurrency and new programming models on the Java platform, according to the Project’s Home Page.

I was very excited to read about the current state of Project Loom in the State of Loom article which came up just a few days ago! The final design they have settled on is a dream-come-true for Java developers.

It will allow nearly any existing code that currently relies on the good-old Thread class for concurrency to immediately benefit with almost no changes at all, all the while making one of the hottest features of cooler and trendier languages, async/await, look like one of those regrettable it-sounded-liked-a-great-idea-at-the-time features they wish they didn’t have anymore.

It even sounds too good to be true, and whether that’s the case remains to be seen!

Luckily, State of Loom published a link to the Loom EA binaries so anyone can already take it for a spin! And that’s exactly what I did.

Here’s what I found out!

Getting started with Loom

After downloading the Loom’s Linux tar ball and unpacking it (I am using Ubuntu 20), I tried to create a Gradle Project to play around with it, but Gradle is not ready for Loom(1) yet.

But Maven is! After writing a basic POM and a very basic Java class to test virtual Threads, I was up and running.

I used this little bash script to set my Java home and get Maven to build my project:

And my little Java class:

The reason for using a latch in this code is so that the print-outs are actually shown! As it turns out, virtual Threads, as they’re now calling the lightweight Java Threads Loom is introducing, are daemon Threads by default (i.e. background Threads that do not stop the JVM from shutting down, as normal deamon Threads).

As a side note: java.lang.Thread’s setDaemon(boolean on) method’s new Java docs have this to say about daemon Threads:

The above warning is missing in Thread.Builder#daemon(boolean)’s Javadocs, so remember this.

I imported the code in IntelliJ without problems (just had to create a JDK pointing to the Loom’s JDK, of course, and set the Language Level to X - experimental features), but couldn’t get it to run the code… fortunately, using mvn package to create a jar, I was able to run the code using plain java:

Nice! The code runs! Looks like virtual Threads have no name though. Makes sense, if you’re going to have millions of them, as they say you can, you probably won’t remember them all by name.

1 million virtual Threads… hm… how about we try that!

Here’s a silly program that calculates the sum of the first 1 million natural numbers:

This program runs in 0.1 seconds and consumes 33MB (most of it the initial heap size) according to my system monitor.

But it’s boring! We want it to use all cores of our machine!! Let’s use virtual Threads to solve the problem :)

This example raises a small issue: it can get tricky to await on a million Threads for a result. If you do have to use that many, normally, they are likely to be independent of each other, so you don’t need to merge the results later.

But not in our silly example above, of course. Creating a List with one million Future objects so that we can wait on all of them would be an easy solution, but that seems awfully wasteful. That’s why I again used a CountDownLatch to block execution until all Threads we expect to run have completed their jobs!

As pointed out on Reddit, another way would be to create a single-use ExecutorService, submit all tasks, then shut it down, which will block until all tasks complete.

This correctly prints the result as well:

Can you think of a way to prove that the sum of the first one million natural numbers is indeed 500_000_500_000? Hint: think about the number sequence both going forward and in reverse.

This example may not be realistic, but it does show that you can, in fact, start up 1 million virtual Threads in a span of just a second or so!

Curious to know just how little memory I could give the JVM and still run this example, I set Xmx to smaller and smaller values until it crashed. It looks like we can get away with a heap as small as 6MB in this case!

You may notice that the reported maximum RAM consumed above was 45MB, much more than the 6MB given to the Java heap. That’s because the JVM itself needs memory for things like the Garbage Collector and management of its resources, which is not counted towards the application heap. This article explains that in detail if you are curious.

Just for fun, I tried the same thing with non-virtual Threads. To my surprise, the program actually ran successfully without an explicit memory limit, but it took 57 seconds and 382MB of RAM! When I limited heap memory to 50MB, the program still ran successfully, but according to my system, it actually took 260MB of memory, which I think is due to the fact that the JVM allocates most of the memory required by Threads off-the-heap.

This little exercise shows us 2 things: one is that creating a large number of virtual Threads is fast and the memory overhead small!

Another, is that not all problems are worth parallelizing, as you are certainly aware of.

One problem where having a million different virtual Threads running at the same time is not unrealistic, is a HTTP server. Because servers tend to be IO bound (i.e. spend most time waiting on disc or network operations), this is one of the most obvious applications where you would want to use asynchronous programming, despite its high costs in terms of the complexity it introduces. After all, you don’t want each server to be able to only handle a few hundred simultaneous connections because each connection is holding on to its own Thread.

But can we use virtual Threads to fix that problem?

To investigate that, I decided to use RawHTTP, a very simple HTTP Java library, for a few reasons:

To keep things simple, instead of using databases or making connections to other HTTP servers, I decided to simulate the server spending time on those things with Thread.sleep. That should be enough to make each connection “costly” to the server, while allowing us to test that virtual Threads do help keep resources under control.

A Hello World HTTP Server can be implemented with RawHTTP using virtual Threads as follows:

If you want to follow along, the Maven POM at this point should look like shown in this Gist.

I added the Maven Shade Plugin to make a single runnable jar, so now I can run the server with a simpler command:

To test it’s working, we can hit it with Curl:

All good so far. Notice that we’re using virtual Threads already! All we had to do was provided an ExecutorService that uses Virtual Threads instead of “normal” Threads:

With “normal” Threads, you would never use an unbounded thread pool. But with Virtual Threads, that’s fine! In fact, you do NOT even need to pool the Threads. This example just shows how easy it is to integrate with existing frameworks that rely on ExecutorService.

I also wrote a client to test the server so that we can check how fast we can create requests. The client simply starts a number of threads simultaneously, then in each thread, runs 10 requests (which should take a little over 10 seconds to run, as the server sleeps for 1 second before returning any responses). All responses are checked for correctness, so that we’re sure that the server is handling the load graciously:

The full code for this experiment can be found on this Gist.

Here’s what happened when I started the client with 1_000 threads:

All the 1_000 thread started nearly simultaneously, from what I could see in the output, and the total time was almost 15 seconds.

I sent the exact times the Threads started to a CSV file so that I could visualize that: 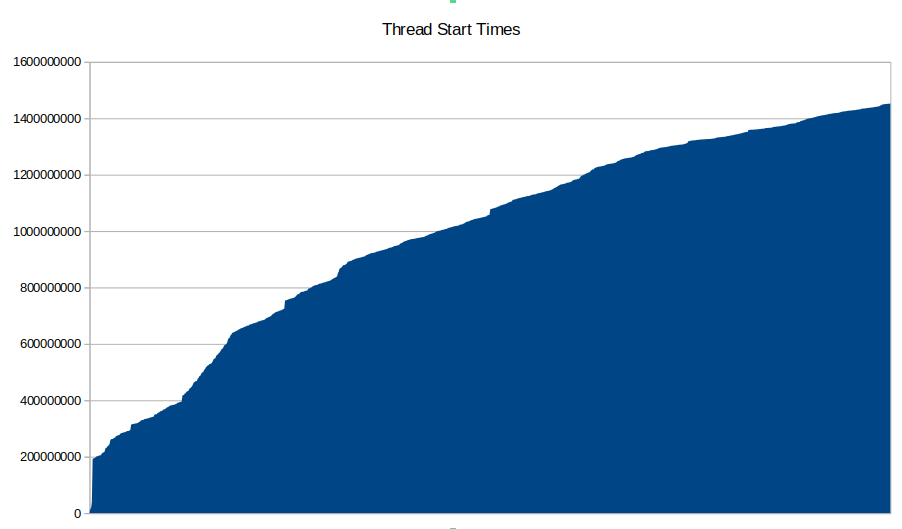 Time is in the y-axis (which shows the delta from the first start time in nanoseconds, hence it starts from 0), and I sorted it to make the data a little cleaner. After a couple of slow starters, you can see that the JVM picks up the pace very quickly and starts executing a new virtual Thread approximately every 1.265 milliseconds.

The reason for this total time may be related to how the OS manages sockets. I checked with netstat that my system was able to open several thousand local sockets, and verified with systemctl that that was the case. But these things can be difficult to know for sure… the main point of this article is that Java, with Project Loom, can have many thousand virtual Threads consuming very few resources, so hopefully doing it by using actual HTTP connections is still useful information to have.

The output above shows that the maximum RAM consumed by the client was 173MB, but we can check how much heap was being actually consumed (thanks to the new and improved VisualVM, which is still my favourite free tool for doing this): 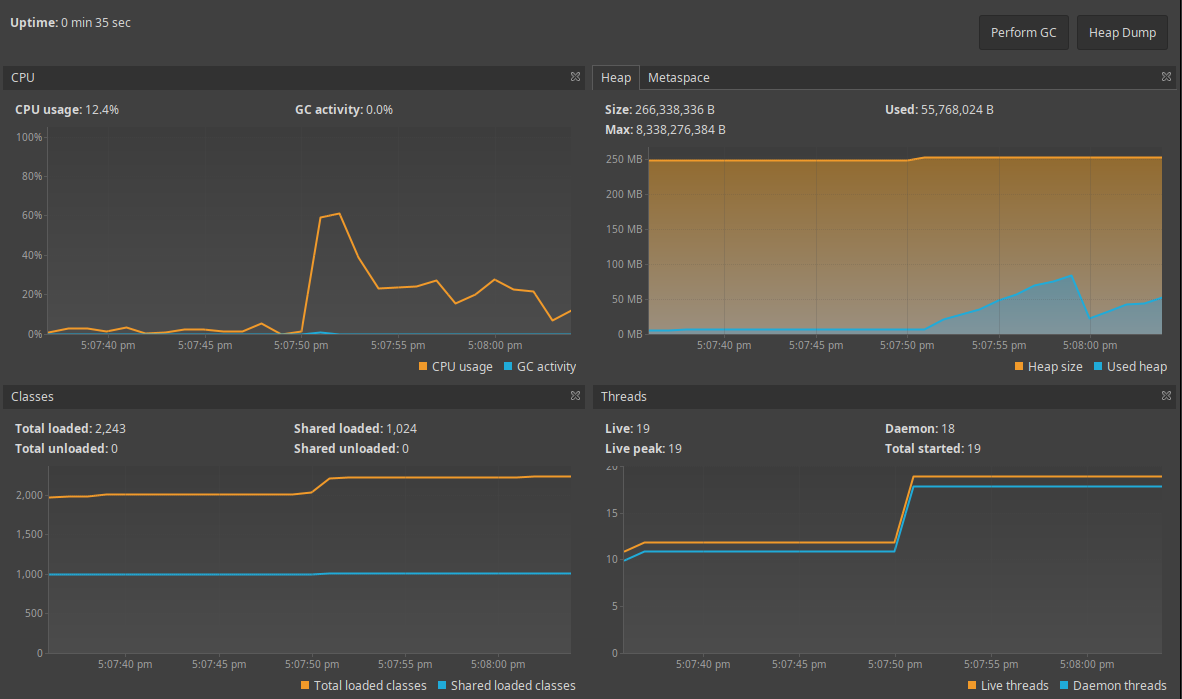 On the server, the situation was quite comfortable as well. I made the server print the number of requests being handled at any given time every 1 second:

Roughly as expected, in a time period of around 14 seconds, the server was handling at least a few dozen Threads, and for almost 10 seconds, it was handling close to 1_000.

Its memory consumption was very reasonable (the JVM didn’t seem to have even bothered to GC while requests were being handled): 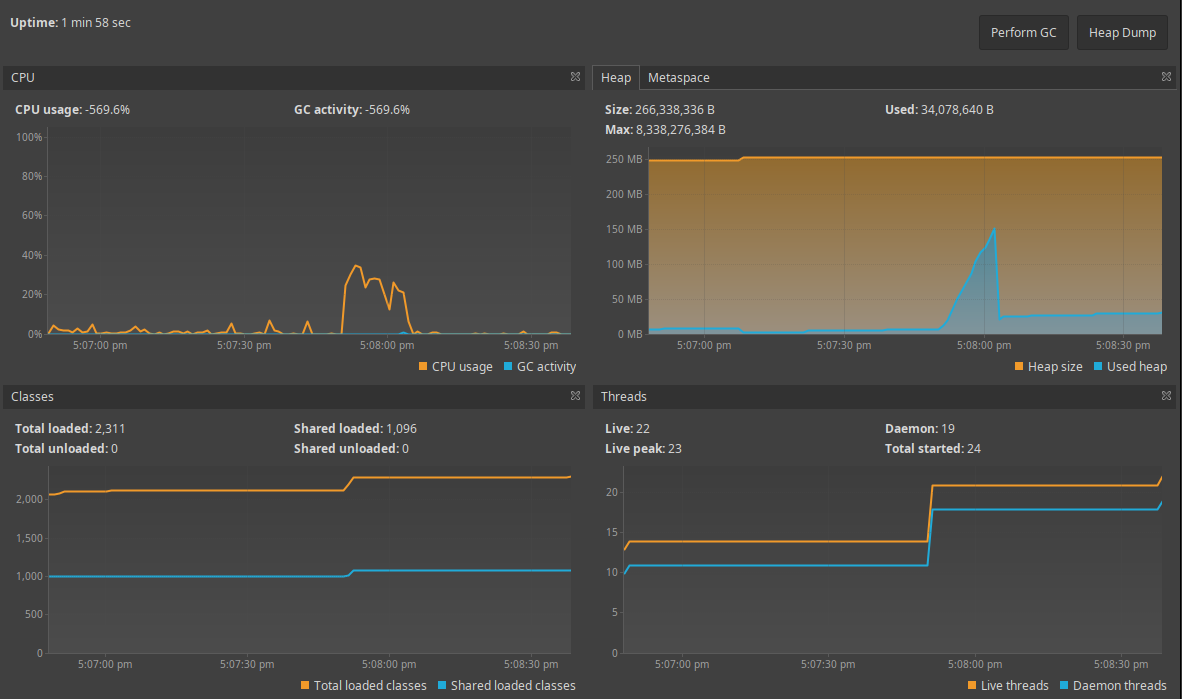 Notice also how the reported number of Threads is very low: maximum of 24. That’s probably because virtual Threads are not taken into consideration, which is expected as keeping track of potentially millions of virtual Threads would not be easy or even worthwhile.

This experiment shows that Virtual Threads are already performing quite well, despite it still being in early stages and most optimizations that were hinted at in the “State Of Loom” article still being ahead of us.

Most importantly, using them is extremely easy, even in existing code bases.

Being able to start Threads so easily and without concerns about having too many is quite amazing and will change how Java developers (and programmers using other JVM languages) write code. Even existing libraries and frameworks will benefit immensely from day one with minimal changes. All the complex machinery built around asynchronous IO and reactive frameworks that tried to solve the problem caused by heavyweight Threads might be relegated to the history books as writing blocking code with Virtual Threads that perform the same or better will become a reality.

There may still be some corner cases where these asynchronous frameworks will have a place(3), but for the majority of Java programmers and libraries, using the simpler, more familiar synchronous, blocking code, will definitely become the right choice: it’s much simpler and seems to be as performant.

Gradle error when trying to build with JDK 15 EA:

`ThreadLocal` becomes an anti-pattern when used with Virtual Threads because when you're expected to have a large number of Threads, having memory associated with each one becomes unfeasible.

I imagine that the Actor model, for example, will remain very relevant for the guarantees it provides regarding race conditions. It will likely be a lot easier to implement on top of Virtual Threads, in fact.